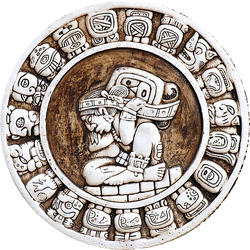 The Maya viewed the world as being made up of three domains: the starry arch of heaven, the stony middleworld of the earth, and the dark waters of the underworld below. The Maya often used crystals in curing and in divining. Crystals found in caves were considered to be especially powerful.[1]

The Maya were a literate people: their writing was capable of capturing all of the nuances of sound, meaning, and grammatical structure of the Maya languages. The Maya wrote by carving on stone, engraving jade, inscribing shell, and incising bone. In addition, they had accordion-folded books which were made from beaten bark paper surfaced with a thin layer of plaster. In their writings the Maya recorded their history, their genealogies, their views of the world, their mythology, and records of trading and tribute. Maya also carved their writings in stone, known as stellae.[1]

Catholic priests considered the books of Maya to be the works of Satan and ordered their destruction during the Spanish invasion. Today, only four books remain, all of them being astrological calendar almanacs for the timing of rituals.[1] The Maya calendar is largely the result of a system of numerology based on intervals gathered through astronomy. The Maya observed numbers in natural phenomena and investigated their mathematical patterns, searching for the underlying order of the universe. By employing a calendrical system based on astronomical cycles, the Maya created a mirror through which the days on Earth reflect the sacred order of the cosmos, as gathered from the motions of the heavens.[2]

The Mayan counting system was used in mathematics and the Maya calendar, based on units of twenty. The Mayan's counted on a vigesimal counting system which is counting a person's fingers and toes. Their base system consists of 0 to 19. In written Maya, a dot represents 1 and a bar represents 5. Numbers from 1 to 19 are represented by combinations of dots and bars.[1]

The Maya have always conceptualized time as cyclical. Individual small cycles combine to create larger cycles. For example, the small cycles of 13 and 20 days combine to form the 260 day cycle. Large cycles are combined with others to create even larger cycles. Over the last decade, researchers have demonstrated that the enormous time increments recorded in the Dresden are the lowest common multiples (LCM) shared by smaller cycles. For example, a large distance number in the Dresden’s Venus Pages, long count 9.9.16.0.0, has been shown to be equally divisible by most of the important Maya astronomical and calendrical cycles (Aveni 1980:192). The distance number totals 1,366,560 days. Cycles which evenly divide into it include; the Tzolk’in (260 days), the tun (360 days), the solar year (365 days), the Venus synodic period (584 days), the Mars synodic period (780 days), the correction factor of the Venus tables (2,340 days), the Venus/solar period (2,920 days), and the Calendar Round (18,980 days or 52 years).[2]

The Maya Sacred Round is a 260-day enigmatic ritual calendar used in various ways throughout the Maya civilization. The Guatemala highland peoples knew the Sacred round as chol q’ij, meaning "count of days". The Yucatec Maya use a Sacred round known as the tzolk’in, meaning "division of days". [3]

All Maya sacred round calendars have cycles of 260 days,[4] which consists of numbers 1 to 13 alternating against a cycle of twenty named days.[5] The 260 different combinations of numbers and named days had numerological significance for priests and those in royalty. Its primary function served to observe terrestrial cycles for agriculture, such as the planting and harvesting of maize. It may also be seen as a reflection on the gestation period of a human life.[2]

The Maya solar calendar (Yucatec: haab’, Guatemala highlands: masewal q’ij)[6] has eighteen months of twenty days, spanning a 365 day period (one solar year). The remaining five days are known as wayeb’, the "nameless days". This five-day period was thought to be a dangerous time. During wayeb’, portals between the mortal realm and the Underworld dissolved. No boundaries prevented the ill-intending deities from causing disasters. To ward off these evil spirits, the Maya had customs and rituals they practiced during wayeb’. For example, people avoided leaving their houses, or washing or combing their hair.[7]

The 260-day Sacred round repeats itself 73 times, spanning 52 years,[10] before the calendar round resets back to 1 Imix' 1 Pop. This method of observation allowed the Maya to precisely date events within a 52 solar year period, especially for rulers within their dynasty. The calendar round was used throughout Mesoamerica. However, Maya dates were specific to their origins and location, and not synchronous with any other cultures.

In Classic Maya, the Long count is used to record dates for periods longer than the 52 year calendar round, such as to determine the age of the world, as it is in the Mayan creation myth. Many Maya Long count inscriptions are supplemented by the Lunar Series. Long count dates are typically seen inscribed on monuments. Misinterpretation of the Long count calendar was the basis for the popular belief that a cataclysm would take place on December 21, 2012. For the ancient Maya, "it was a huge celebration to make it to the end of a whole cycle", as noted by Sandra Noble, the executive director of FAMSI.[11]

A lunar calendar was used by the Mayans to monitor lunar phases and positions of the Moon, in lunations of six cycles. A lunar series is typically represented by five glyphs that indicate the current lunation, the number of the lunation (in a series of six), the current ruling lunar deity, and the length of the current lunation. The Maya counted the number of days in a lunation, using the new moon as day zero. In a lunation, they observed the first nineteen days as one cycle, and the remaining period from day 20 to 30 as a second cycle. A Mayan lunation has six cycles, numbered zero through 5. Each cycle is ruled by one of the six Lunar Deities.

A 584-day Venus cycle was maintained to track the appearance and conjunctions of Venus, as the morning and evening stars. Many events in this cycle were seen as being inauspicious and baleful. There are six pages in the Postclassic Dresden Codex devoted to the accurate calculation of the heliacal rising of Venus.[12] Venus was associated with war by the Maya. They used it to divine good times (called electional astrology) for their coronations and wars. Maya rulers planned for wars to begin when Venus rose. 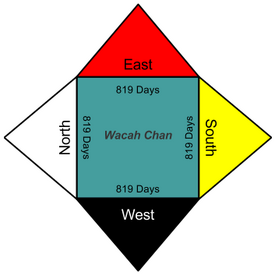 819-day cycles are attested to in scripts such as the Dresden codex.[13][14][15] This system repeats sets of (9) and (13) day intervals associated with different deities, animals, and other significant concepts.

Retrieved from "https://astrology.fandom.com/wiki/Mayan_Astrology?oldid=3480"
Community content is available under CC-BY-SA unless otherwise noted.