While mainstream culture places great emphasis on one's "sun sign" or "zodiac sign", true astrologers know that it is not the constellation that one is purportedly born under, but the constellations in which the planets are resident at one's time of birth.

Before the discovery of Uranus by Wilhelm Herschel, only the Outer Planets of the Solar System were used for divination outside of East Asia in the Old World. These consist of seven so-called planets (the Sun is treated as one for the purposes of astrology).

The traditional planets are:

Chinese astrology seems to place great emphasis on the Moon, Saturn and Jupiter at the expense of the other planets.

Vedic Astrology treats the ecliptic nodes of the Moon's orbit as planets, the north node being named Rahu and the southern one Ketu.

A dispositor is the planet which is Lord of a House occupied by another planet. If well-placed or exalted, a dispositor may have positive effects on the occupants of the House. 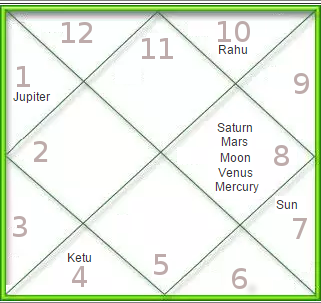 In this Vedic-style lagna varga or birth chart above, the North Node or Rahu is in the sign of Capricorn (denoted by the number 10). Since Capricorn is ruled by Saturn, the same planet functions as Rahu's dispositor in the above birth chart.

Retrieved from "https://astrology.fandom.com/wiki/Planets?oldid=3637"
Community content is available under CC-BY-SA unless otherwise noted.